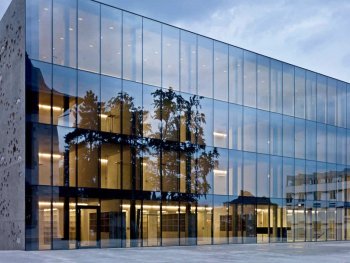 The crossbar-rack system is the simplest and most inexpensive of all available facade systems, but at the same time very reliable. We can say that it provides an optimal price-performance ratio.
The design of such a facade is quite simple. Vertical elements (posts) and horizontal elements (crossbars) form a porous frame, the basis of the facade. Double-glazed windows are installed in the openings from the outside, which are also fixed from the outside with aluminum pressure strips.
From above, the pressure bar is closed with a decorative clip cover. It is the clip that is the element that is visible from the outside of the facade. And it is the clip that is decorated in order to add color to the entire facade. With their help, the facade system can be given a very original look. In addition, the clips are very functional - you can embed various communications and building systems in them. For example, backlighting. 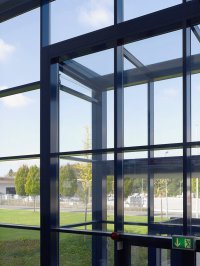 The crossbar-rack facade system is thermally insulated, that is, "warm". For glazing such a system, conventional polysulfide double-glazed windows are used, both single-chamber and double-chamber. The main requirement for double - glazed windows is high thermal insulation (not lower than the established regulatory values). A huge selection of different types of glass gives you complete freedom of action in choosing the appearance of the facade.

Metal-plastic windows can be built into the crossbar-rack facade as opening elements. This is a common practice for reducing the cost of construction. At the same time, the thermal insulation and tightness of such a structure remain at the same level, and the appearance practically does not change (you just need to choose the right color of the plastic profile). The crossbar-rack facade is not intended for the production of inclined planes.